ONE AREA IS BEAUTIFUL PHOTOGRAPHY FOR FANS.

Broga is a small town that sits on the border of Selangor and Negri Sembilan in Malaysia. It is situated 50 kilometres (31 mi) from Kuala Lumpur and approximately 33 kilometers (21 mi) from Seremban, the capital of Negri Sembilan. 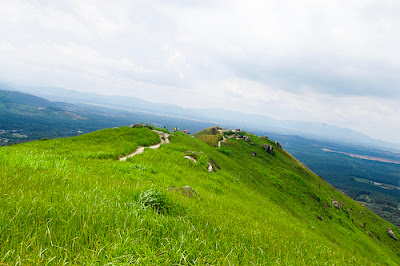 Bukit Broga, also known as 'Bukit Lalang', after the local species of grass that grows abundatly here, is a hill in Semenyih, about 40 minutes away from Kuala Lumpur. It can be reached a short distance after the University of Nottingham, where the entrance trail starts from an oil palm estate facing a rabbit park across the road. Its easy accessibility means that there are many visitors on the weekend. As far as nature is concerned, the hill is composed mostly of lalang grass while some lower areas are covered with palm oil trees or young secondary forest. Squirrels and birds such as swifts are common sights around these parts. 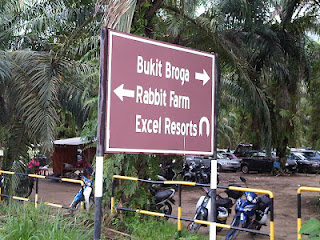 What is truly appealing about hiking up to the peak is the panoramic view of the landscape. In fact, the view from the top of Broga Hill has been described as incredible and offering one of the best sights from such a low hill. Lush valleys of green rain forest, peppered with flat palm oil plantations and a few towns, can be seen vibrantly on a clear day, with the backdrop of several mountains in the far distance. During the mornings, mist rising from the ground from the warmth of the sun envelop the landscape in a carpet of white, providing a surreal atmosphere. This is why most hikers come up during the early mornings and wait for the sunrise to catch the breath taking view. The hike itself is relatively easy, taking between 20-45 minutes to reach the highest peak depending on how fit you are. 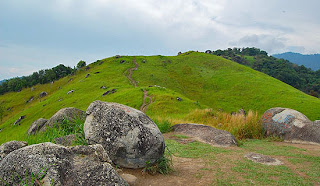 There are a few steep ascents, but nothing to hard to conquer. There are three peaks in total, each one ascends above the other through a clear path fringed by the tall grass at each side. The trails are well marked and trodden, so it's pretty hard to get lost or even lose sight of the way. The best times to climb Broga Hill is during the weekdays, as weekends will see a huge glut of hikers clogging the various peaks. It is best not to walk around on the grass, as this species in particular will cast an itchy sensation on bare skin. In the evenings, swifts and swallows will dart around the hill in large numbers, riding on the breeze that so often blows across the peaks. During windy periods, the tall grass will rustle like waves across the sea, providing a spectacle to behold. 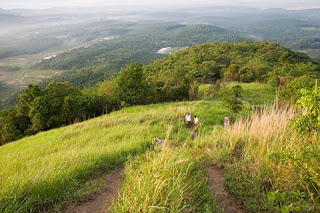 Broga takes its name from the River Broga which runs through the area. The name Broga is believed to be derived from Buragas, a mythical beast that lives in the forest.

Broga was mentioned by Freddie Spencer Chapman in his book, The Jungle is Neutral, to be a location where British-backed rebels fought against the Japanese during World War II.